As I clearly said, few atheists say categorically that no gods exist.  We say that there is insufficient evidence to believe that gods exist.  Unlike the “faithful”, we are prepared to change our minds, given reasonable scientific proof.

Mr Steyn talks about forming a common consensus.  This indeed is what happens in science.  Based on experimental evidence, the vast majority of scientists agree on such things as heliocentric theory (the earth revolves around the sun), that HIV causes AIDS, and the reality of anthropogenic climate change.

Notice that this does not happen in religion: There is no sign that religions are converging to a common understanding.  This is because religion ignores evidence.  This wilful blindness is even hailed as a virtue, as proof of faith!

We are simply talking about what is real.  We apply standards of rationality and evidence to most aspects of our lives: Why not to religion?

Mr Steyn believes that religion is necessary for morality.  He must have a low opinion of himself if he thinks he would behave immorally if God were not watching him.

However, he is wrong.  Humans have in-built morality, put there by evolution.  It should be obvious that a group will do better than an individual will, and that a tribe is more likely to survive if its members cooperate.

Humans are not the only moral animals either.  Chimpanzees, for example, show altruism and public service to members of their group.

If we look at issues like contraception, abortion, gay marriage, and stem cell research, it is the atheists who adopt a “live-and-let-live” attitude, and the religious who are hell-bent on imposing their sectarian views on others. 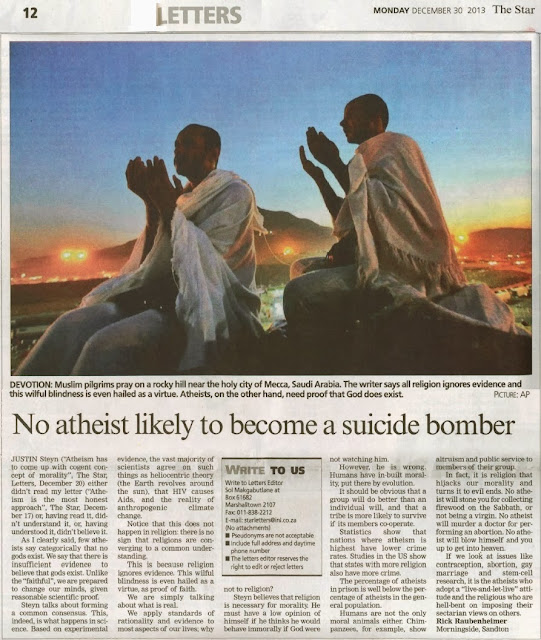 Posted by Rick Raubenheimer at 09:53 No comments: 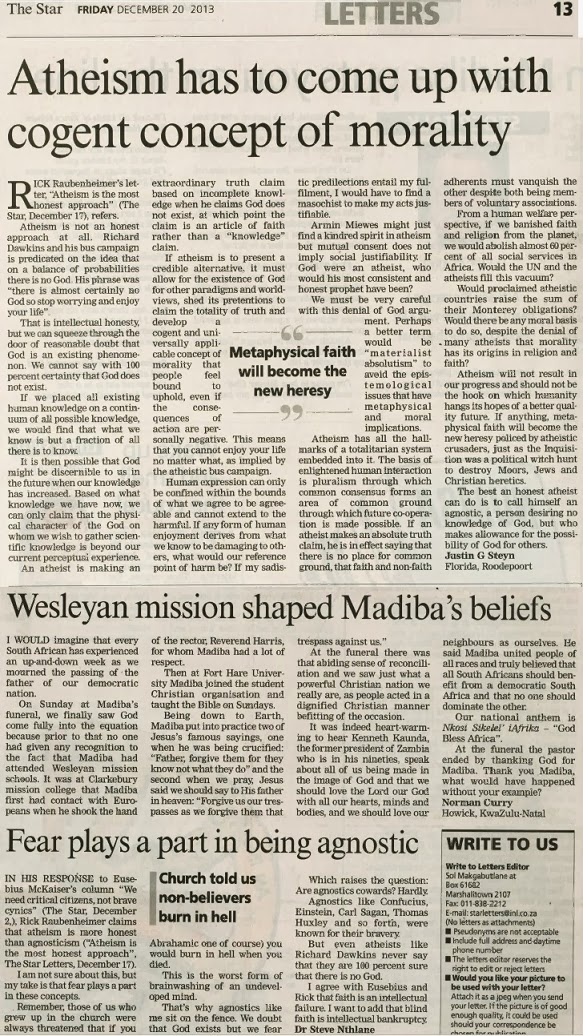 Posted by Rick Raubenheimer at 21:45 No comments:

I refer to Eusebius McKaiser’s column on Monday, December 2.

I agree with Eusebius on many things, such as the value of Sunday’s Conference “Thinking Things Through”, and that faith is an intellectual failure.  However, he, in contrarian fashion, also takes a swipe at atheists and maintains that agnosticism is the most honest approach.  I disagree.

Eusebius makes a distinction, between atheism, which he characterises as saying that there is no god, and agnosticism, which, he says, is not committing one way or the other.

Eusebius says that atheists baldly claim that god does not exist.  This is a “straw man” argument, beloved of Thabo Mbeki, where you misrepresent your opponent’s position to make it easier to knock down.

The word “atheist” comes from the prefix “a-” (not) and the word “theist” (a believer in a god or gods).  An atheist is simply someone who does not believe in any gods.  The word “agnostic” derives from the same prefix “a-” and the word “gnostic”, meaning “having direct knowledge” (usually of god).  Few of us can claim to directly experience god, so the majority, theists included, are agnostic.

You will seldom find an atheist who says he is 100% sure that there is no god. Most follow the scientific method, which allows for error and correction. One can say with reasonable certainty that Odin, Jupiter, Allah and Jesus Christ do not exist, at least as described in their religious writings.  However, one cannot yet disprove the claim that a god set off the Big Bang and now lives in retirement on Betelgeuse IV, taking no interest in our affairs.

How, does Eusebius, as a professed agnostic, live in practice?

An agnostic has a dilemma. Should he give equal credence to all gods, and worship at church, mosque, synagogue and temple, just in case?

Even that may not be enough: Many Christian sects believe that the others are going to Hell.  Better to worship at all of them! The poor agnostic will have no time left for anything else!

Which is more honest? 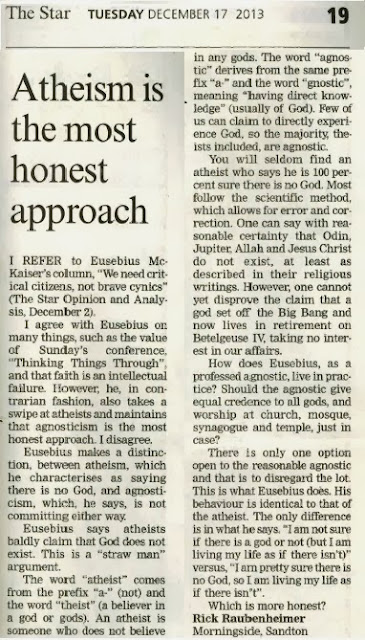