So Many Gods, So Little Time to Pick the Right Ones...

Ebrahim Nathie (Letters, The Star Monday January 6 2014, “Atheism boggles my simple mind”) says that human intellect is fallible, so we should rely on divine intellect, or ”god”.  Christians, Muslims, Jews, etc. say their scriptures prove that god exists, so the burden of proof should be on Atheists.  He concludes that if the religious are right, Atheists are doomed for eternity but if believers are wrong, there is no penalty.

The latter argument, “Pascal’s Wager”, has been well discredited, but there is no harm in doing it again:

Yes, many religions (excluding Buddhism, Jainism, and Scientology) say that there’s a god –or gods, in the case of Hinduism, Shinto, etc.-- but they disagree radically about what those gods want their believers to do.  Accept Jesus as your Saviour, but if Allah turns out to be in charge, you’re damned.  Worship Allah, but if the Jews are right, you’re in big trouble!

With over 3000 gods to choose from, the Theist is no closer to Heaven than the Atheist is.

In fact, the believer is worse off: She will have devoted time, money, and energy to a fantasy, and missed the wonders of reality.  The devoted Jew and Muslim will have missed bacon and prawns.  The Young-Earth Creationist will not have been amazed by geology and evolution.  The Jehovah’s Witness may have died for lack of blood transfusion.

All will have voted for people and supported policies that are not in their best interests, delaying human progress in fields like medicine and ethics.

Ebrahim (since we seem to be on first-name terms now) thinks Atheists have the burden of proof.  In other words, we should prove that there is insufficient evidence for the existence of gods?

On this same basis, does he believe in Jehovah, Allah, Krishna, Odin, Zeus, fairies, invisible pink unicorns, and that he won $50 Million in an internet lottery he didn’t enter?

The universe is proof of the existence of the universe, not that it was created by Jehovah, Allah, Krishna, Odin, Zeus, or the Flying Spaghetti Monster.

Religious scriptures look suspiciously like they were written by misogynistic, homophobic, xenophobic, and (by today’s standards) barbaric uneducated men, not a transcendent intellect.

What a pity that the Creator did not include a few equations in His Scripture!  If only He casually mentioned E = mc² or that the Earth is 4.54 billion years old and revolves around the sun!  Imagine where we could be now had He described Natural Selection, the law of universal gravitation, or the secret to faster-than-light travel.

Sadly, there is no evidence that a higher mind than ours had any hand in religion.

May I suggest that Ebrahim, instead of bemoaning his human intellect, rather (in the words of the scripture) “become as little children”?   All children are Atheists until they are indoctrinated into a random religion. 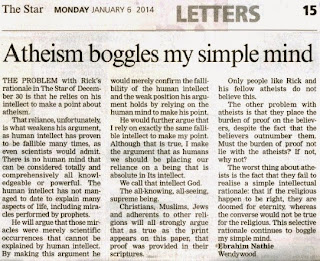 Posted by Rick Raubenheimer at 08:30 No comments: