"Miracle" of Easter? What "Miracle"?

I refer to your Editorial “Let’s honour the Miracle of Easter” on Thursday, April 7.

In fairness, it looks as if the Editor went on holiday and delegated the Editorial to the Sub-Editor who, needing some time off, delegated it to the Sub-Sub-Editor, and so on down the line until it ended up in the lap of a junior staffer.  This could explain why it is thought through so poorly.

The word “miracle” has two main meanings:
(a) An extraordinary and welcome event that is not explicable by scientific laws and is thus attributed to a divine agency.
(b) A remarkable event or development that brings welcome consequences, or an exceptional product or achievement, or an outstanding example of something.

The Editorial makes the elementary fallacy of confusing the two.

The “South African Miracle” you cite is an example of the second one.  It was welcome, perhaps unlikely, but entirely governed by physical laws.

The alleged resurrection of Christ (if it occurred at all) would be an example of the former type of “miracle”, something inexplicable by science.

The fact that we had a “miracle” of the second kind is no reason to believe that miracles of the first kind take place.

Indeed, the evidence for the alleged resurrection of Christ (if he ever existed), is not convincing.  No eye-witness accounts exist.  The earliest of the gospels was written at least 40 years after Easter.  The gospels differ significantly on major points, therefore some, perhaps all, of them are wrong.  The earliest existing copies of the same gospels differ in thousands of ways, many of them materially so.

Contemporary historical records outside of Christianity do not corroborate any of these major events claimed in some of the gospels:


How is it possible that such (literally) earth-shaking events were not recorded by anybody else?  Or even in all the gospels?

The unbiased observer has to conclude that the resurrection of Christ is not, in fact, a miracle, but a myth.

The Star is –or was until the takeover by Iqbal Surve– a newspaper concerned with facts, unlike some others.

It behoves the Editor, even in the Editorial, to stick to real-world facts and not to indulge his readers in their superstitious fantasies, no matter how comforting or well-entrenched they may be.  By all means, wish the Christians well with their holy day (which not all your readers share) but please do not treat these myths as reality. 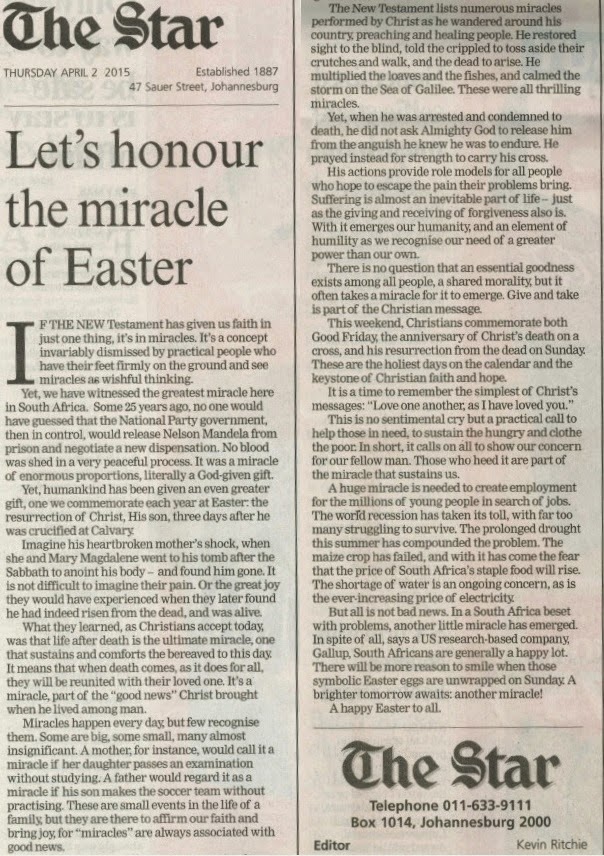 Posted by Rick Raubenheimer at 21:30