Bible Cannot be Reconciled with Science, and Must be Rejected

Bishop Moagi Khunou’s letter “Much agreement between Bible and true science” (The Star, January 21, copy below) is a classic piece on how religion deals with pesky facts.

First, if you don’t have a good response, denigrate your opponent’s views as “hackneyed and discredited” without refuting them.

Then, profess Special Knowledge.  Your opponent is deluded, as indeed are many Christians, but you know better.

In fact, denigrate anyone likely to disagree: They are “casual or simplistic minds”, not “serious students”.

Knock down some straw men and deliberate misunderstandings of your opponent’s position, throw in a few apparent “facts”, a casual lie like a deathbed conversion of Darwin, skirt around anything difficult, and you’re done –what could be easier?

Only a believer is qualified to criticise the Bible?  Hardly. Reading the Bible with an open mind is one of the surest routes to atheism

Let us confront what the Bishop avoided:

I was refuting Mr Lee’s claim that the Bible is “the infallible and inerrant Word of God”.  I showed that it is not inerrant (error-free) as it has serious mistakes, and not infallible (incapable of error) as it has been modified over time.  I said nothing about whether God personally wrote the Bible, one of the Bishop’s straw men.

There are plenty of professing Christians who believe that the Earth is less than 10,000 years old, including about 30% of US citizens: They are called “Young-Earth Creationists”.  However the Bishop is welcome to believe that a Divine Space Opera took place between the first two verses of Genesis.

Let’s also ignore that in Genesis 1, God creates plants first and man last, after all other animals, but in Genesis 2 He creates man first.

What we can’t ignore is that in Genesis 1, God creates day and night on the first “day”, and then it was evening and morning (a literal day –not an “age”). Plants are created on the third day, and the sun, moon, and stars on the fourth day.  Thus we have day and night proceeding before the creation of the sun.  The earth is supposedly older (much older, the Bishop claims) than the sun, which is itself two days older than Adam.  Please try to reconcile this with science!

The Bishop claims that there is agreement between the Bible and “true science”.  “True science” is a tautology: If it’s not true, it’s not science.  No doubt the Bishop only regards as true the parts of science that don’t contradict his myths.

There is a big difference between a Bible written by fallible men, and science done by fallible men.  Science is self-correcting.  Experimental results –facts– are checked against the proposed model.  There is stringent peer review.  Scientists compete for the best explanation that fits reality.  Hypotheses that do not work are discarded.
Religious books, on the other hand, are not rewritten when they prove inaccurate.  The believer is not encouraged to check that his beliefs match reality.  Instead he is called upon to believe ever-more absurd things in order to demonstrate his “faith”.

For example… If all the eight-million-odd species on earth were on Noah’s Ark and got off on Mt Ararat, isn't it strange that we find marsupials only in Australia?  The Bishop seems to believe that they ran and swam (or built boats?) all the way there without any being left behind!  Continental Drift, coupled with evolution, is a much sounder explanation.

Note how the Bishop skirts the genealogy of Jesus.  “The Saviour had to be born in the house of David” –what nonsense is this?  Does the Bishop know how babies are made?  Matthew 1-16 deals only with the male line: Either Joseph is Jesus’s genetic father, in which case Jesus is the “son” of David, the “son” of Abraham –but not the Son of God– or, if God inseminated Mary, then Jesus can be claimed as the “Son of God” but he has no family tree, and the “prophecies” are false.

Of course the Bishop has no answer to the 500-year difference between the conflicting so-called genealogies of Jesus in Matthew 1 and Luke 3.  If God “inspired” Matthew and Luke, he “inspired” at least one of them to lie.

We can find biblical phrases that can be shoe-horned into agreeing with modern science after the fact.  Nevertheless, the Bible has been used, and continues to be used, to suppress science and human rights.  One thinks of church persecution of Galileo and Copernicus, the “Creationism” rampant in the US, and persecution of gays in Africa.

According to Wikipedia on “Deathbed Conversion”, Charles Darwin did not “surrender to the wisdom of God in the end”.  Deathbed conversion stories should be taken with a pinch of salt.  It is claimed that Christopher Hitchens too had a deathbed conversion: He called for a priest, and converted him to Atheism. 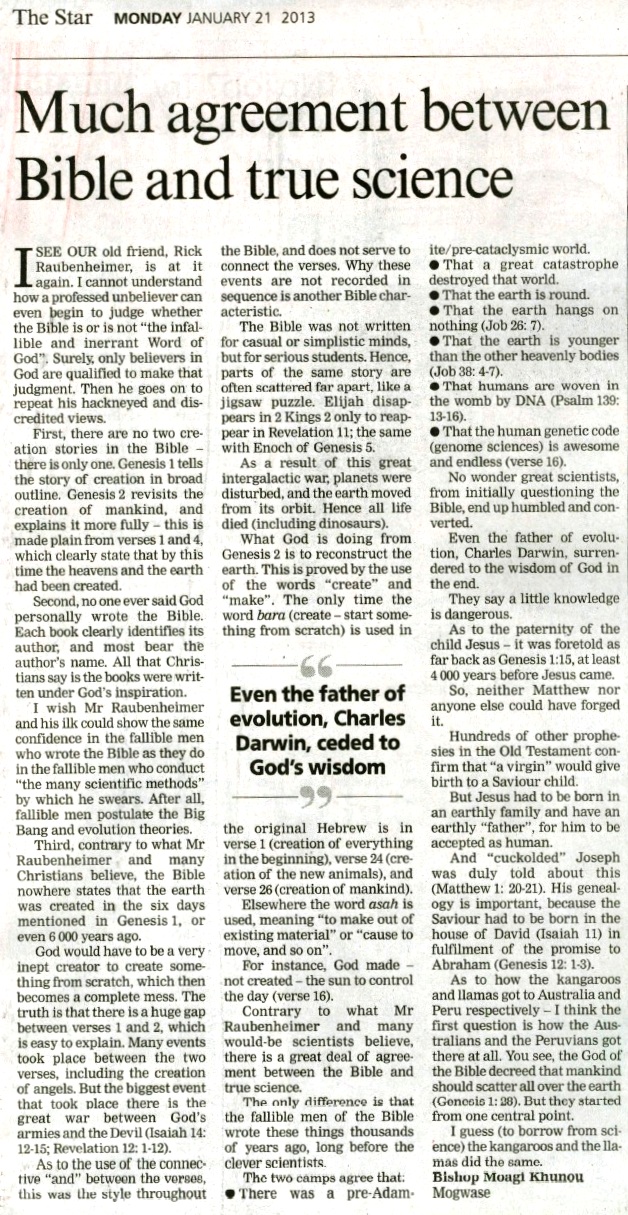 Posted by Rick Raubenheimer at 21:29