The Second Coming of John Lee

I refer to John Lee’s letter “Nobody will determine end of days, only God” (The Star, Monday January 7 2013).

Mr Lee needs to check his assumptions.  The Bible is not “the infallible and inerrant Word of God”, as he believes, and one can prove this easily.

First proof - objective reality: The two creation myths in the Bible are both wrong. They can in no way be reconciled with the true age of the earth as corroborated by many scientific methods.  The tale of Noah’s ark begs the question: How did all the kangaroos get to Australia and the llamas to Peru?

Second Proof - logic: A document that contradicts itself cannot be true.  The self-contradictions in the Bible are many and well-documented.  Among the more glaring ones are [Such as] the two conflicting genealogies of Jesus in Matthew 1 and Luke 3.  From Abraham to David the records agree.  From David to Joseph there are serious discrepancies.  Luke has 40 generations between the two; Matthew has 25, a difference of about 480 years.*

Matthew 1 starts “This is the genealogy of Jesus the Messiah the son of David, the son of Abraham”.  When he gets to Jesus in verse 16, he contradicts himself, saying “…Jacob the father of Joseph, the husband of Mary, and Mary was the mother of Jesus”.  The original writer of the book of Matthew probably had Joseph as the father of Jesus.  A later writer then grafted in the “Son of God” myth, apparently not realizing that if God was the father of Jesus, then Mary’s cuckolded husband Joseph and his entire descent were irrelevant.

Third proof – the Bible has changed: Since Mr Lee has internet access, he should look up the book “Misquoting Jesus: The Story Behind Who Changed the Bible and Why” by Bart D. Ehrman, and the web site www.codexsinaiticus.org which deals with Codex Sinaiticus, the "Sinai Bible".  The latter is over 1600 years old and includes the oldest complete copy of the New Testament. It differs substantially from modern Bibles, and from slightly younger versions like Codex Vaticanus and Alexandrinus.  There are literally thousands of differences, many minor, some major, between these early versions of the Bible and the one Mr Lee reads.  How can something that appears in so many different versions be infallible or inerrant, let alone the “Word of God”?

The Bible is, simply, [It is] the work of fallible men who knew very little about the universe and explained it as best they could to try to control their followers.  We know better now.  Second Comings, Revelations, Heaven and Hell are just lies to scare the faithful.

*Footnote: I have set up a spreadsheet comparing the Old testament, Matthew 1, and Luke 3's genealogies of Jesus.  e-mail me if you'd like a copy. 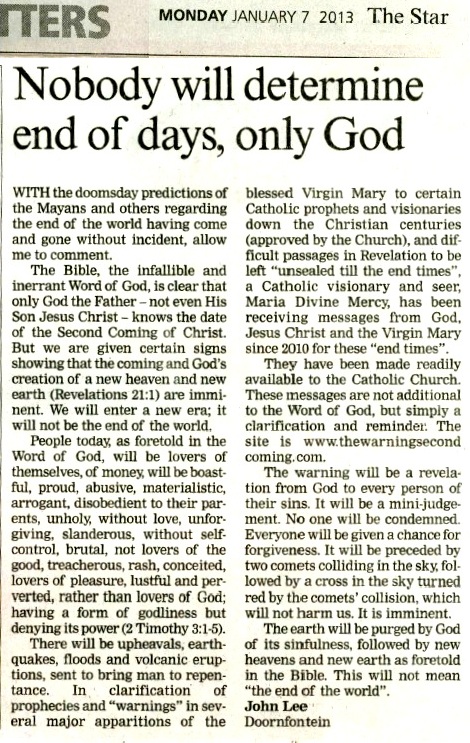 Posted by Rick Raubenheimer at 10:00