Allow me to remind Mr/Ms Modak that, centuries before the UK or the USA were founded, Islam was itself spread by the sword, colonising the Middle East, North Africa, parts of Europe, and much of Asia.

This violence extends to the present day in majority Islamic nations, where we have only to look at the fate of apostates who leave Islam.

Even those who choose the wrong branch, suffer:  In Syria, Iraq, and Pakistan we see terrible violence between Sunni and Shia.

Good Christians, like the Rev Peter Storey (The Star May 29) speak out against the bad parts of their scripture, reinterpreting it in the light of modern morality.

Until good Muslims likewise disown the antisocial parts of their scripture, radicals will have the support they need for violence.

Colonialism is just an excuse. 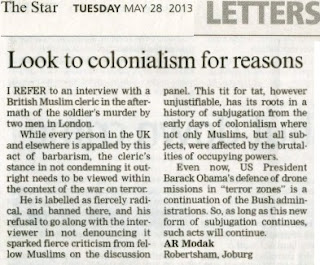 Posted by Rick Raubenheimer at 08:00